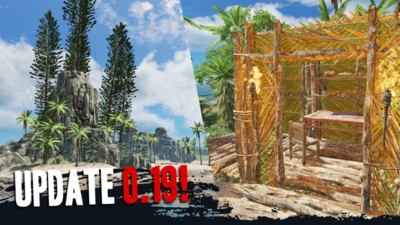 One of the large new features is the new Progressive Loading system! This is a huge feature. Loading an island is now spread out across multiple frames to minimize the performance hit. This drastically reduces the loading hitch when approaching an island. You will see a small decrease in fps as some CPU power is used to load in all the new objects progressively, but this is still much better than the single large hitch. This had been getting worse as time went on as more objects were added and particularly as island sizes got larger - something that we hadn’t really planned for or ever intended. We’ll still be keeping islands on the smaller size as that was our plan, but the overall experience of traversing between islands is much smoother now.

When playing this build hopefully you will be able to see why we’ve been working on the things we have been – The new terrain billboarding system, the new discovery fog and the new progressive loading all work together for a much nicer and more polished experience overall. We know work on these core systems is admittedly not as exciting as general content, but the end result is that loading hitches are minimal and islands don’t pop in anymore - That’s a huge improvement and we’re pretty happy about it :)