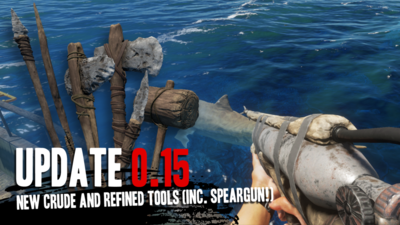 This update focuses on a section of our roadmap to reclassify tools into two new categories, Crude and Refined. Eventually, this will change the focus from finding the good tools to allowing you to craft them. A refined version of a tool is created by upgrading the existing Crude version. The combo’s to upgrade to refined tools will likely be adjusted when we introduce smaller sundry items like leather and leaves in the future.

We’ve also been hard at work on improving loading times between islands and generating better billboard representations of the islands you’ve discovered. These developments aren’t ready for this release but we’re seeing very promising improvements. The progressive loading and dynamic billboard generation should hopefully be ready for the next update. There are also some exciting developments with our concepts for the new main menu design, which won’t only improve the aesthetics but will also affect how you enter the game in a cool new way.