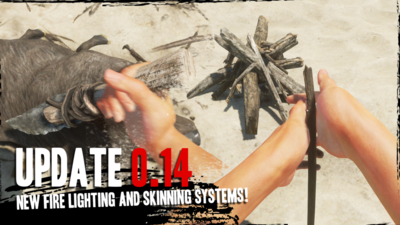 This update introduces the new Fire Lighting and Skinning systems! The processes of lighting fires and obtaining edible meat from animals has been broken down into two new mechanics. To start a fire, you now need to gather wood to craft Kindling. When you have Kindling equipped, you can use it on a fire to begin using a basic wooden hand drill to light your tinder. After a number of continuous and successful attempts, you will have lit your fire.

To obtain edible meat all animals now need to be skinned. Individual animals can no longer be cooked or smoked without skinning them for meat first. To skin an animal you will need to craft a Knife. When you have your Knife equipped, you can use it to interact with a dead animal to ‘skin’ them, gathering meat. Different animals have different sizes and amounts of meats you can gather from them. All animals are now tied to this new system: fish, crabs, birds, boar, snakes, etc. These new systems will be tied to your skills in the future things to affect things like success rates and availability.

The paddling animation is also back in this update. As we’ve mentioned before, the paddle is no longer a unique item that you carry around but is part of operating the Life Raft vehicle. The paddle will equip when you operate your Life Raft.

The weather has also been restored. There’s no new work on the weather as yet, but it is back and functioning which should help with your water situation!

There have been some smaller changes behind the scenes in an effort to track down/alleviate some users problems with picking up interactable items like buckets. Please let us know if you're still experiencing problems.

It’s worth mentioning that this update is a little smaller this week as we took a week off for personal time to refresh and regroup. We’re also working on a new roadmap so we’ll keep you posted!